My Horse Threw a Shoe

My Horse Threw a Shoe 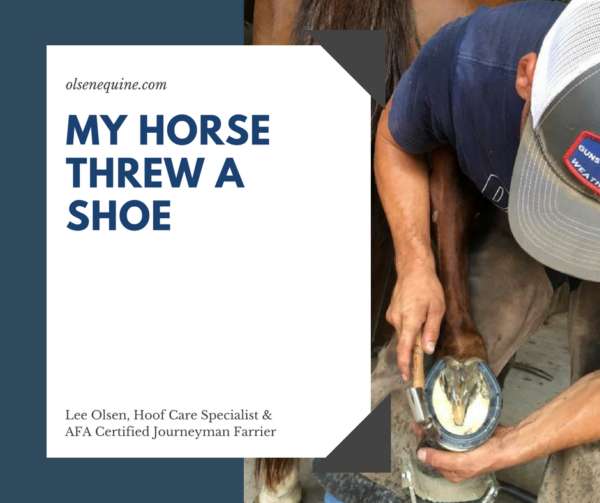 Have you ever had a horse lose a shoe? Chances are, that if you have ever had a shod horse you’ve most likely experienced the frustrations that come with a thrown shoe. Whose fault is it? Is it because the farrier did a poor job applying the shoe? That’s usually where the blame goes first, and it’s totally possible it could be due to an incorrect trim or application of the horseshoe.

With that said, there are a lot of other variables that directly affect how successful you will be at keeping shoes on. In this article, we are going to consider the variables of environment, performance, balance, soundness, confirmation, rider error, and physical condition as they relate to losing a shoe.

Environment can play a big role. If it’s wet a lot of the time where your horse is at, or if you wash your horses excessively, the hooves can get water logged and be a lot like a sponge. In this case, clips can be very helpful. They do not stop a shoe from being pulled off, but it will stop shearing forces and twisting effects. In effect, this will strengthen the hoof wall by limiting movement and stress on the nails.

When a horse gets daily baths, the hooves will expand when they’re wet, and then shrink when they dry out. Shavings will suck out moisture quickly as well. Clinches will eventually loosen with all of that expansion and contraction. When a shoe is lost like this, most often it doesn’t take much force to pull it off and usually appears flat. In the US, clips aren’t really that common, but if you get into most other countries, they are the norm.

Knowing the job the horse is going to be performing is critical to a successful shoeing. How a horse’s shoes are fit greatly depends on what job the horse is doing and the length of shoeing schedule it is on.

A good rule of thumb is that slow horses, such as dressage and show jumping horses, get shod with plenty of expansion (meaning a little extra shoe left behind for support). When these horses are turned out in a small pasture, it is usually supervised and for a short period.

Racehorses are shod short and tight, meaning no extra shoe left out for the go grab at all. That is for two reasons. First, they are on a short schedule, usually four-week cycles or less, so there isn’t going to be much growth. The second reason is for safety. These horses are running very long lengths as fast as possible. The horses are simply running on heart and fumes at the end of the race. No one wants to be the reason a horse overreaches and goes down, or takes out the rest of pack, risking the lives of jockeys and million dollar race horses.

Having a horse out of balance, whether it is with an unlevel trim or misplaced shoe, can greatly change the way a horse moves.

Soundness plays a major role in pulling shoes. A lot of the time, pulling shoes consistently can be one of the first red flags for a lameness issue. Compensary lameness is extremely common in this instance. Many times after a horse had a history of constantly pulling shoes, a major soundness issue surfaces later, such as soft tissue, etc.

Some horses are naturally going to have a harder time keeping shoes on due to the way they’re built. For example, a horse that is downhill (meaning their withers are lower than their hips) is going to have more problems dropping its front end and overreaching.

It is a proven fact that you have to shoe differently for amateurs than for professionals. Watch the difference in how a horse moves when a great rider is on it, compared to someone who isn’t. Usually the professional will keep the horse collected, framed up and balanced, while an amateur will allow the horse to lose its balance, such as dropping its front end, etc. Many farriers, myself included, aren’t willing to tell any rider that their bad riding is causing the problem. We just adjusting the shoeing to the situation.

Having a horse that’s in shape for the job it’s doing is an absolute must. When exhaustion happens, so do missteps and wrong movements. Same goes for the rider, but like just like with the bad riding, not many people I know are going to tell a customer that!

Horses can be their own worst enemy. I love turning my horses out to play as much as anyone, but that’s where a lot of problems will happen. Whether it be pawing at a fence at feeding time and hanging a shoe, running around like a wild animal, or bucking and playing, nothing is better for the soul of a horse and yet harder on its’ shoes. When a horse is at play, the erratic movements and behaviors can result in a misstep and a missing shoe.

At the end of the day, there are lots of legitimate problems that can influence the loss of shoes. Everyone involved needs to remain open-minded and do his or her part. The owner should recognize if any of the above issues are happening. The farrier needs to rise above the situation and find a solution to the problem. There are many different ways to shoe a horse, and reaching out to other farriers can usually help you make a plan for success.

This article was first published in the Dally Times- The Magazine for Team Ropers.er]