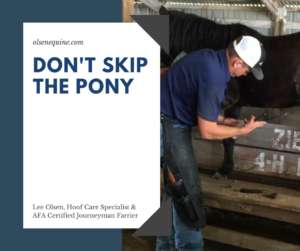 Who’s got a miniature pony? Everybody needs at least one. They can be a lot of fun to have around for young kids, serve as a companion pony, or even as a cute pasture ornament.

As much fun as ponies can be, they require a certain amount of special care. As you might have guessed, hoof care tops the list.

Where problems can arise is when you look at their feet and decide that they don’t look that long. It’s easy to do when you’re used to looking at full-grown horse. You have to keep in mind that the full-grown horse is 5-6 times bigger, and likewise, the pony’s feet are going to be 5-6 times smaller. They still have all the things going on in their feet as the big horses do, so regular maintenance will be required.

When you do have someone trim your pony, please do not ask if they are cheaper to trim. They are cute and cuddly, but most of the time it’s hard to work on their feet. Due to their size, it usually involves crawling around on the ground. They’re typically not great to do, and if they pull their feet you can easily shave off a knuckle with your rasp.

Another problem is that they don’t require as much feed as a standard-sized horse.  Overeating is very common in ponies, which will cause them to founder, otherwise known as a Laminitic episode. It causes the laminae in the hoof to weaken, allowing the coffin bone to sink and/or rotate.

Once a Laminitic episode happens, the condition is degenerative, meaning you will always have an issue with lameness. Practically speaking, they’ll start growing feet that look more like elf shoes than hooves, or they may even start to curl up in extreme situations. It’s best not to ever get into that position at all.

Be careful of feeding them like a normal horse; they only require a fraction of the normal ration. So, if you have a lush, beautiful pasture you keep them turned out on, there is a very high chance that during the time of the year when the grass is most potent, they will be lame. That will be because they’re having a Laminitic episode. Also if you’re keeping the pony with other horses that get grain and alfalfa, you can bet those ponies are sneaky enough to eat all they want.

For all those with ponies, I encourage you to keep its diet regulated and trim its feet often.