Is a high nail a happy nail or a hot nail?

Is a high nail a happy nail or a hot nail? 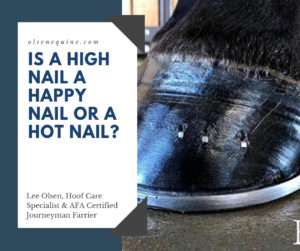 Have you ever experienced your horse becoming lame because of a hot nail? Chances are that you have, and unless it’s caught quickly, it usually abscesses and sidelines your horse until it’s resolved. It’s more common than it probably should be, although some horses are very difficult to successfully nail shoes on to than others. I always say there are two kinds of farriers, ones that have hot nailed a horse before and liars…

To successfully nail a shoe, your horseshoe nail needs to go right into the white line. Nailing outside of the white line will cause your nail to go into the wall, becoming weak and low. If a shoe is ever lost with low nail, it usually explodes, causing lots of hoof wall damage.

Anything on the inside of the white line would be considered a hot nail. On horses with thinly-walled hooves, it’s possible to nail into the white line and still make them sensitive. So, it is safe to say that it’s very important where the nail goes in at!

Another thing to keep in mind is the importance of making your horse stand still and quiet for the farrier. The white line is somewhere around 1/8 of an inch wide, which is not a lot of room for error. Anyone who has been to a carnival can tell you that hitting moving targets is not in your favor!

A high nail is a happy nail. In fact, a lot of pride is taken by great farriers on how high and how perfect of a nail line they can achieve. If a shoe is lost with high nails, it rarely takes any wall off at all. The secret is a correct trim and fitting your shoe around the foot, not under it, causing the nail holes to be inside the white line.

While it is a bit precise, there are good reasons to pay attention to the nail line. When you see a good nail line, you can assume the hoof was trimmed and gathered correctly, removing any flares and distortions. It’s also evident that the shoe was applied correctly, leaving the nail holes of the shoe right over the white line where they’re supposed to be.

Remember… A high nail, is a happy nail.